A song is a powerful communicator. Much like poetry, it has the ability to elicit raw emotion through the judicious use of words. In a four-bar chorus, those words can lay bare a soul begging to be forgiven or express a longing beyond compare.

My musical library is full of singer-songwriters, who through verse and chorus paint a picture with their words and music. They use the notes and rhythms as punctuation for their thoughts, telling a story from beginning to end in less than four minutes.

Long the backbone of folk music, these musicians have been gaining momentum in popular music. No single genre can categorize them. The iTunes charts are full of the likes of Ed Sheeran, Eric Church, Ryan Tedder and Alicia Keyes. While their popularity and commercial appeal are varied, the sad irony is that the music industry bestows the majority of its riches on those who can do little more than rhyme (and often badly, at that). How many of the songs topping the current charts will have longevity?

Song has long been a way for people to communicate. It has been used by the enslaved to provide a voice to their otherwise silenced souls and by the rebel to make their discourse heard above the din. Early news and legends were sung by minstrels traveling between kingdoms.

With the passing of Leonard Cohen a few short months ago, one can scarcely turn on the radio without hearing his seminal work “Hallelujah”. The Canadian singer-songwriter enjoyed a career that spanned 50 years and saw him rise to the heights of popularity. He was sought after by the likes of highly respected singer-songwriters Judy Collins, Willie Nelson and James Taylor. Despite his talent, it was rarely recognized. Although, the great Bob Dylan saw his gift. Cohen continually sought the meaning of life in his lyrics and even served a brief sojourn as a monk in that very pursuit. But it was fellow, and perhaps equally obscure, singer-songwriter, Jeff Buckley, who would forever change Cohen’s life and cement his talents in the minds of the collective consciousness. Buckley’s rendition of “Hallelujah” in 1994, nearly 20 years after Cohen penned it, will forever place him in the company of the greatest songs ever written.

It’s a song I can listen to on repeat until my heart breaks. The haunting melody, visceral emotion and unanswered questions are the stuff of true genius. It speaks to me in a way I’m unable to articulate. It would be impossible to count the number of times I’ve listened, yet every time it brings me to tears. That, in itself, is a testament to its power.

Songs have the power to break you, build you back up and inspire you to go on in the face of insurmountable odds. Although I rarely listen to music while I’m writing (I prefer not to have competition for my words), I’m unable to go a day without music. The lyrics of some song are often the first thing my mind wakes to in the morning. Music grounds me and gives me the ability to believe in the power of words.

Consider the times a song has lifted your spirits, transported you to another place or time or calmed your mind. We all have songs that define us. They speak to each of us in a way often personal and profound. 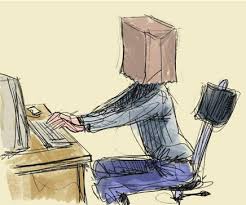 The truest form of anonymity is achieved while writing fiction. As authors, we are given that ability, in the form of a fictional character, to say what we’re thinking, without judgement or criticism. We can act boldly and irreverent, demure and saintly or arrogant and unapologetic. After all, it’s not the author saying those things, it’s our character.

How often have we opened the back of a book or clicked on an author’s profile and come face-to-face with someone other than who we’ve imagined them to be? My first shocker of this kind came with Wally Lamb’s She’s Come Undone. I still recall how incredulous I was to see a man peering out from the book’s jacket. Lamb so clearly embodied Dolores’ feminine voice, there seemed no way he could have breathed her to life from a male perspective. Yet there she was.

That startled feeling is a testament to the author’s ability to create a fictional fascade, stepping deftly into an alter-ego which bears little resemblance to its host. With a bit of literary schizophrenia, a skilled writer has a platform to give a voice to any variety of characters while maintaining their anonymity and, sometimes, gender.

In The Outsiders, young female author SE Hinton provides the voice of rebellion and disenfranchised youth for a group of male characters from the wrong side of town. She successfully communicates the angst of growing up in a town of ‘haves’ as a ‘have not’, showing us what it’s like to be a Greaser. Whether she’s channeling the jail hardened Dally, the sensitive Johnny or the youngest Curtis, Ponyboy, who hopes for a life on the inside, she does so with a grit and authenticity that forever changes the lives of teen readers. From the very first page, she embodies her characters and drags them inside a world where social injustice and prejudice permeate their lives. We know exactly who each character is, what they look like and what drives them. We cheer for them, cry with them and see some of ourselves in them.

Great writers use their anonymity to shine a light on characters that may have otherwise existed in the dark. They take the bones of an idea and add flesh to give that character depth and meaning, and make them matter to their reader. If the writer has done their job well, the character they’ve created is as real to their reader as anyone they’ve ever met. They recognize their flaws, forgive their weaknesses and root for their successes.

Who are your favorite literary characters and why does their story matter to you?

Writing is a mysteriously powerful outlet. It can give a voice to an otherwise silent part of us; the one we are reluctant to share with the outside world. These written words give us an opportunity to say the things we need to, haven’t had the chance to or, maybe, shouldn’t say to the world. Writing gives us permission to be ourselves, vulnerable and insecure or powerful and confident. Until we share them, these ideas remain no more than words on paper.

However, once they are shared, these words have power. They can build us up or tear us down. It doesn’t matter if they are true or false. It only matters whether they have been read. More often than not, once they leave their author, they are left to be interpreted by the reader, without further explanation or discussion.

The power of the written word is seen on a daily basis, often minute by minute as it ‘trends’ or ‘goes viral’. With the proliferation of social media, everyone now has the power to be a writer – a chronicler of ideas, thoughts and emotions. With a social media account and a keyboard, they have a platform and the power to be heard. In fact, anyone can write down their ideas, sometimes in less than 140 characters, and send them out into the world.

But the true power of words exists in their intention. Words can inform or persuade. They can excite or incite. They can build walls or tear them down. The true power of words exists in what you choose to do with them. When a writer sits down to a keyboard, they do so with a purpose. They have a story to tell, an idea to explore or a voice which needs to be heard. While each and every one of those goals is important to the writer (or they wouldn’t sit down to write them), it is important to remember we have a responsibility to those who read our words. When we accept permission to speak our truth, whether anonymously or credited, we make a choice to accept responsibility for those words and their effect on others.

What do you choose to do with your words?

Hello world! After years of writing for other people, I’m excited to have a forum for my own writing in the form of this blog.

However, being a writer isn’t simply putting pen to paper or fingers to a keyboard. Any random Facebook post or Twitter feed is evidence of that. Being a writer is finding something valuable to say and communicating it in a way which makes someone you’ve never met say “I wish I said that”.

So, along with regular blog posts, I’ll be offering what I consider to be ‘quotable quotes’. When I taught middle school English, I used them to train my students to be writers. By asking them to interpret the quote, they were exercising their writer’s mind and seeking inspiration from someone else’s words. Some of my students loved the exercise and others hated it. Either way, I hope they realized its value. The quotes were meant to be seeds of inspiration. Reaching out from the page, they would makes us think a little longer about our place in the world and the profound effect our words have on each other.

As I mentioned, I was a middle school teacher so I tend to read young adult fiction. It’s the genre I write in, as well. While many of my quotes come from novels I’ve read (and I’ve read a lot), others are words which reached out to me from sages, both famous and obscure.

Whether you consider yourself a reader or a writer or, maybe, just a thinker. I hope these quotes will move you the way they have me. Feel free to pass them along. I hope they inspire you. If they do, I’d love to hear about it.